Ripplet is an app designed to let people freelance local services. Users can simply post something they need done or advertise themselves by specifying what services they offer—both of which the user controls their own price. Ripplet has a focus on user profiles to give a better sense of who you're connecting with; people can link their social media to give an external idea of who they are along with a personal description and reviews from other users. 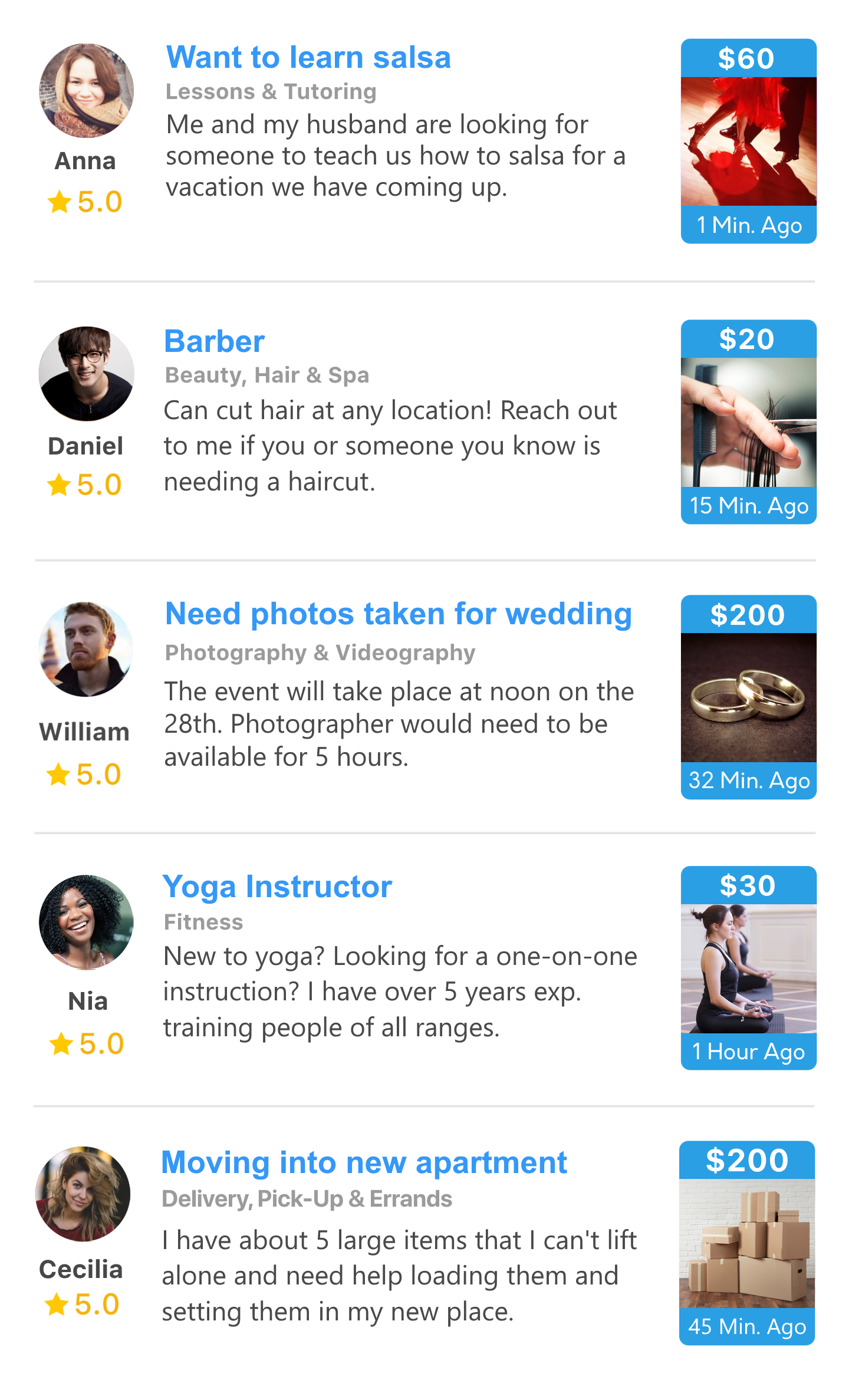 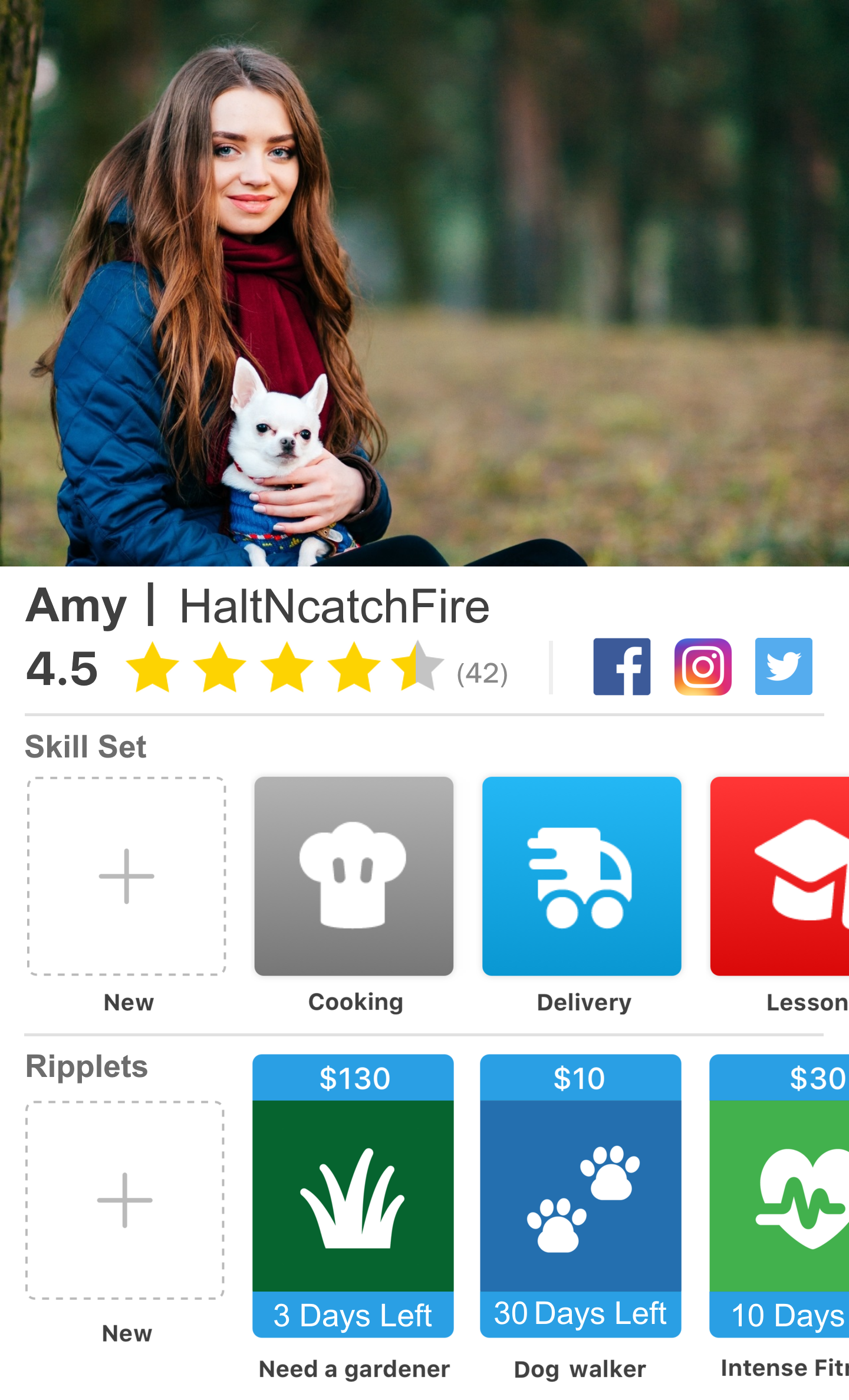 Ripplet primarily came out of my own frustration. I knew I had skills and could do tasks for others and just wanted a better way to promote myself independently. I may not have a brick and mortar shop, or setup an established operation, but that doesn't mean I couldn't provide good, personal workmanship. Not only that, but I wanted a direct way to access other people that might have skills I lack in. And sure there are service apps out there that let people deliver/order food, use their place for accommodations, drive others around, etc., but I saw all these apps as a middleman for my personal connection; they're not setup to let you keep those connections you made 1-on-1 with people. With ripplet I could also build new skills depending on what people need done, and from there build a portfolio of people I can help or continue to get help from—all based on networking services together. So with this in mind—and a couple years of work—ripplet was made. I hope the concept can continue to grow and give people more options on how they're able to get and offer local services to one another.

Little backstory: Ever since I've owned a car it's always felt like I never had any luck when it came to getting repairs; in reality it was me being taken advantage of by just about every auto mechanic shop I went to. The best experience I had dealing with an auto shop was a time in college where I didn't have a ride home and needed one of the mechanics to drive me back. It was about a 20 minute drive, and during the trip back I got a chance to make small talk with the guy and personally show the issue the car was having. It was because of the past experiences I was hoping in that moment if I got on the guy's good side I had a better chance of getting genuine work. So I asked him how he was getting paid. When he stated hourly I asked him if he wanted to take a break (mind you the shop didn't know the distance to my house). We ended up sitting at my place for about half an hour watching TV and I offered him food & drink; from there made some more small talk and as he was leaving thanked him in advance for working on my car. That was the only time that the part I needed fixed worked like the day I got it.


That was until this experience. I was in need of another car repair and had been quoted $700 by the mechanic I'd been going to on/off the past few years; however the car only cost me $4K, so I wasn't too comfortable with the price and decided to wait as I was getting closer to finishing the app. Once it launched I put out a ripplet asking for someone that knew cars to give it a look. It was then that a guy named Richard messaged me about his willingness to help. This made me elated because not only was I seeing the result of the app come to fruition, but I may get a better understanding of what's going on with my car (and build that type of connection I had with the other mechanic). We met at the front office of where I lived and gave him a run down of what was going on. I also drove it around with him to replicate the issue (offering him a drink or bite to eat along the trip). After driving back he started to tinker around and discovered my power steering reservoir had chunks n' bits inside of it. We then purchased some new fluid at the local auto parts shop and he flushed out the reservoir. From there I gladly paid him and haven't had any trouble with it since.

But it was in that experience that not only had I saved hundreds of dollars for my car repair, but I learned—and saw—what was actually going on with my car. And now if I ever have an issue I now know a person I can personally call and pay to work on any car issue I'm having. Additionally I can now recommend him to anyone else I know that is having car trouble. After that experience we've kept in touch and started to become friends. Since then we've met up for lunch and I've offered to help him with things that I know and share ideas on how to improve the app for other users as it grows :).